Greentech Media (GTM) reports Texas solar prices are currently the lowest in the nation when compared to other regions in the U.S.

In the Southwest region of the U.S., including Texas, Arizona, and New Mexico, three-quarters of the quotes were below $3.50 per watt. The average gross cost of a solar energy system is down to $3.21 per watt in Texas — this cost is lower than the national average of $3.69 per watt, according to EnergySage‘s Second Solar Marketplace Intel Report.

Although it yields the lowest cost per watt, the nine year payback period in Texas is still higher than the national average of just over eight years, according to EnergySage. 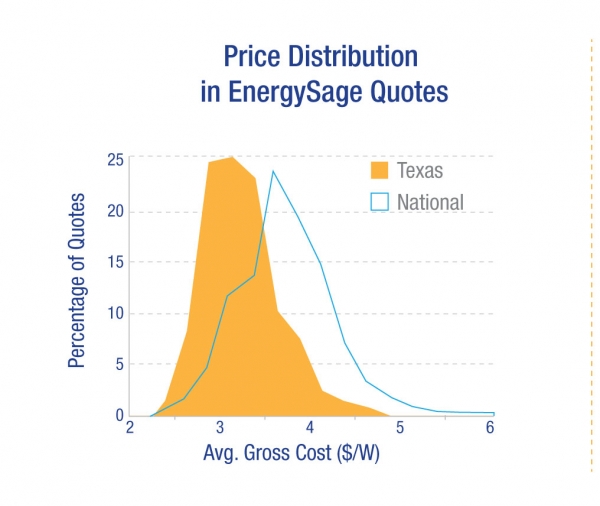 EnergySage “collects over 1 million data points per day regarding the market dynamics of the US solar industry.”

What could possibly be causing this issue in Texas?

According to GTM, there is stagnation within the solar market in Texas, because of low natural gas prices — as well as “the lack of net metering in the deregulated market structure.”

The good news is that solar prices keep decreasing. Consumers are gravitating to owning systems rather than leasing as a result.

GTM reports that 90% or more of EnergySage customers prefer ownership, “though customer-owned systems constitute less than 40 percent of the national market.”