The ever-expanding world of solar racking can be incredibly overwhelming for those unfamiliar with its terms, concepts, and applications. This article will be going over primarily roof mounting systems and the Sol Attach approach to it.

Quite simply, a photovoltaic (PV) mounting system or solar module racking system refers to the equipment and process used to fix solar panels onto roofs, buildings, or the ground. In the early 1970’s, building-integrated photovoltaics (BIPV) began to emerge. BIPV is a concept we’ll be going over a little later. For now, just know that BIPV refers to conventional building materials being replaced by PV materials; the roof, skylights, or facades are replaced by PV systems.

The arrays of a solar PV system are mounted on rooftops usually with a gap to the surface of the roof. In many instances, the roof is already constructed so the process involves retrofitting panels to the surface. The conventional process for mounting the panels is done using extended aluminum railing. However, this is where the Sol Attach approach is slightly different. Rather than using extended aluminum, we developed an installation mount which eliminates that railing saving installers time and money. As an added plus, it also looks better! 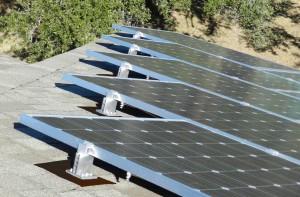 If you’ve taken note, retrofitting is the main process involved when mounting panels to a rooftop that’s already been constructed, but what if the building itself is designed for solar PV? This is where the BIPV system comes in. The BIPV systems are increasingly being used in new building construction. The main advantage with a BIPV system is the initial cost can be offset by reducing the cost of building materials and labor that would normally be used to construct the part of the building that the BIPV modules replace.

We hope this brief article helped you understand just a few of the different types of installation methods involved in the solar panel industry. If you have a follow up question, leave a comment below. Thanks for reading!